Some time ago I started writing a blog post in response to this interesting video by Patrick Willems. I got distracted by life and never finished it. Then, last night, I got into a social media exchange with two former colleagues over the quality of certain Star Wars films, and today I stumbled upon the saved draft of this post. With the thoughts refreshed in my mind, I decided to finish what I had previously begun in responding to Willems’ video.

The short version is this: Willems defines plot holes as “when a story breaks a previously established rule about its own universe; basically, it’s when a story contradicts itself” (00:01:16-00:01:24). He then goes on to assert, citing an example from The Last Jedi (that I will revisit soon) that if one fixates on the “logic” if a film, then one is “kind of watching movies wrong” (00:07:02-00:07:33). I would contend, in response, that while Willems has a good point to make about undue nitpicking of a film, he ignores or has failed to grasp the way the rhetoric of fiction works: the logic of the story must be sufficiently strong to support the emotional impact it wishes to create.

As I’m largely responding to his thoughts on the subject, I’ll include the video here before I say much more about it:

Let me return to Willems’ claim about The Last Jedi: that some viewers complain that the character of Admiral Holdo (wonderfully played by Laura Dern) acts illogically by refusing to tell Oscar Isaac’s Poe Dameron her plans about how to escape the pursuing First Order. While it might be interesting to explore Holdo’s motivation and how the film portrays it (perhaps in another post, sometime), my issue is with his subsequent claim that viewers for whom this logic fails are “watching movies wrong” and they should instead focus on “the things that actually matter” (though he does not fully define what those things are, save for later hinting at the idea of character arcs). The thing is, logic does matter.

One might argue that the most important rhetorical appeal made by film is the appeal to emotion and that the logic of films is more incidental. However, even if this is so, logic and emotion do not exist in isolation from one another.  A narrative must be coherent enough to affect the viewer, or the emotional appeal will have no context, nothing to drive it.  In other words, the logic of the story must be sufficiently coherent to allow for willing suspension of belief, something that J. R. R. Tolkien discusses in his essay “On Fairy-Stories”:

Children are capable, of course, of literary belief, when the story-maker’s art is good enough to produce it. That state of mind has been called “willing suspension of disbelief.” […] What really happens is that the story-maker proves a successful “sub-creator.” He makes a Secondary World which your mind can enter. Inside it, what he relates is “true”: it accords with the laws of that world. […] The moment disbelief arises, the spell is broken; the magic, or rather art, has failed. You are in the Primary World again, looking at the little abortive Secondary World from outside. If you are obliged, by kindness or circumstance, to stay, then disbelief must be suspended (or stifled), otherwise listening and looking would become intolerable. But this suspension of disbelief is a substitute for the genuine thing, a subterfuge we use when condescending to games or make-believe, or when trying (more or less willingly) to find what virtue we can in the work of an art that has for us failed. (Tolkien 60-61)

The need for an intact Secondary World is especially important for fantastical stories, as they cannot always rely on so simple an explanation of the story’s setting as “realistic” in the same sense as the material Primary World. Apart from this risk of damaging a viewer’s suspension of disbelief too much for the narrative to be effective, there is also the question of how a narrative draws and invests the viewer’s attention. Wayne Booth describes a viewer’s desire for a cohesive, reasonably logical narrative progression as “qualitative interests.”

In The Rhetoric of Fiction, Booth defines qualitative interests as the elements of a text that in film are often called “setup” and “payoff.” That is, the narrative completes a promised form, such as the “cause and effect” when a character’s actions impact the story or the “conventional expectations” such as those derived from genre, extending to a sense of aesthetic appeal–essentially, any expectation that the narrative creates for the viewer to experience (125-127). Much has been made of the matter of “subverting” viewers’ expectations, but that is the trick of it: subverting expectations may break the pattern, but it should not break the immersion; “cause and effect” should still hold true, and the Secondary World should still follow its own internal logic. In other words, the story should still make sense.

And that is the real matter behind a “plot hole”: does it sufficiently damage the Secondary World enough to cause it to fail for the viewer? Does it cause the story to stop making sense? The answer, of course, is highly subjective. It will vary from viewer to viewer, and certainly some viewers may be inclined, in Tolkien’s phrase, “by kindness or circumstance” to be more forgiving of such failures than others. (There’s a whole line of discussion about how confirmation bias might lead a viewer to be more or less critical of a film, but that is again another matter.) Willems seems to disregard any discussion of “plot holes” as nitpicking for nitpicking’s sake, but that is only bad faith criticism. What breaks the spell of immersion for one viewer may only manifest as a moment of fridge logic for another, but there is indeed a threshold where plot holes matter, where logic matters.

Does Admiral Holdo’s reason for not telling Poe Dameron her plan to escape the First Order make sense? Does the way The Last Jedi portrays hyperspace travel follow logically enough from the way it has been otherwise portrayed in the Star Wars universe? The answers to these questions are subjective, but to state or imply that viewers who find fault with the film’s logic are “watching movies wrong” is, itself, a very illogical claim that wholly ignores the way narratives make meaning. 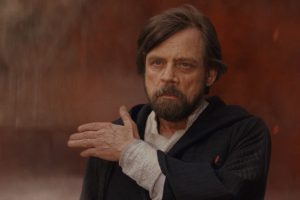 Oh, and as a final thought, I just want to go on record that while I do not personally feel that The Last Jedi has a narrative that makes much sense, I have no patience for some of the sillier objections to the film. I don’t care who Snoke was. It was perfectly logical in the story for Kylo Ren to decide he was done with the guy. I don’t feel that Rey’s parents needed to be anyone special (and I’m looking at you, Rise of Skywalker). I loved the way Leia used The Force. Rose Tico wasn’t a bad character, nor was Admiral Holdo, and Kelly Tran and Laura Dern both delivered wonderful performances. Luke having this moment was absolutely amazing. I do have objections to the film as a fan, but given how toxic some responses to the film have been, even this much later, I honestly feel that it bears noting that I’m not coming at it from that place. I don’t think the film ruined my childhood, and I certainly don’t hate anyone involved in making it. I’m not sure when “I think a movie was bad” became such a matter of life and death for some people, but–yikes, right? Big, big yikes.